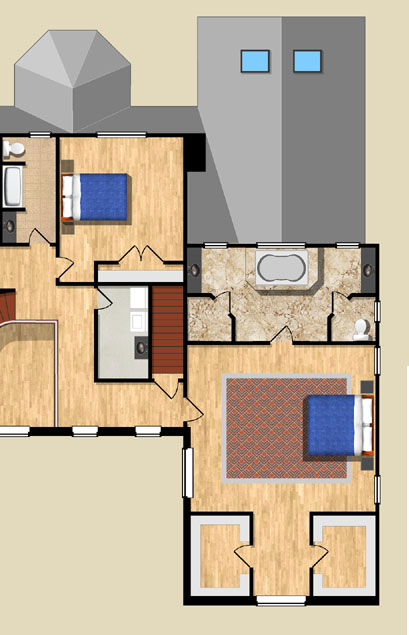 In Newton, there resides an accomplished architect whose interest in the construction process runs as deeply as his artistic vision. Joining him is a highly successful builder with a passion for design that parallels his acknowledged mastery as a craftsman. The duo leads Classical Homes LLC, and these well-known industry professionals are Hossein Vahedi, AIA, and Joseph Zegarelli, professional builder. The combination of their talents, capabilities and perseverance personifies the firm’s model as a leader in bringing venerable classic design into practical modern form.

Both Hossein and Joe became interested in home design and construction at early ages, thanks to their fathers’ involvement with the building industry. “My Dad was a builder,” recalled Joe, a graduate of Northeastern University who briefly performed engineering work prior to joining his father’s business. “He would pick me up from school and take me to the job sites. There, I became curious about how the construction process happens, and the inner workings of a house. Even though we did mostly commercial and multi-family back then, I was always interested in how things were designed and how to bring those plans to reality.”

When Hossein arrived in the United States after marrying in Italy, he worked as an architect in New York City for four years, where the interest he bore as a youth in housing design and construction continued to blossom. In New York, he achieved his Master of Urban Design certification prior to moving to Massachusetts. In addition to Massachusetts, Hossein is professionally registered in Rhode Island, Connecticut, New Hampshire, New Jersey and New York.
The pair seemed destined for success, when their first project (in Lincoln) sold even before the foundation was completed. “I knew then that this was going to be a great partnership for a long time to come,” Joe said. Indeed, with architectural distinction and unmatched construction expertise enriching a growing portfolio, other challenging jobs soon emanated in Wellesley, Brookline, Newton and other areas of Greater Boston. Today, many projects, such as those shown in this issue, are Colonial, Victorian and classic Shingle-Style in nature. Most are challenges that are not only accepted, but welcomed by the team, who employ the finest carpenters and finishers in-house. “I really appreciate old world craftsmanship and design,” said Joe. “Hossein and I get an enormous amount of satisfaction in reproducing or replicating that same high level of quality, as do the homeowners who eventually live in the homes.”

“My biggest reward comes from fulfilling my childhood dream of designing houses but staying in close touch with the construction process,” stated Hossein. “Most architects spend a lot of time in the office, while I prefer to be in the field at the job site.”

“I love creating things, seeing a visual idea and making it take shape. I also love challenges like a project in Brookline where we opened up two sides of the house and had to support the structure during construction. Everyone was asking how do we do this and not have the structure collapse?  We were able to come up with a way to shore up and preserve the structure. When completed, it looked like it was one of the original homes in the neighborhood.”

Along with their capabilities and experience, the team at Classical Homes LLC proves that when an architect and a builder can integrate their devotion and talent with a common level of understanding, anything is possible.

We're not around right now. But you can send us an email and we'll get back to you, asap.